A Primer on Climate Change

Chances are, if you’re reading this, you’re interested in doing something about climate change. But to move from interest to commitment, you should be clear about what you’re talking about and what’s at stake. Keeping that in mind, here’s a brief introduction to the issue of climate change:

To make sure we’re all on the same page, let’s start with definitions. Here are some words and terms you’ve undoubtedly heard but might be hard-pressed to define:

Global warming is just one symptom of the much larger problem of climate change. NOAA Climate.gov cartoon by Emily Greenhalgh. 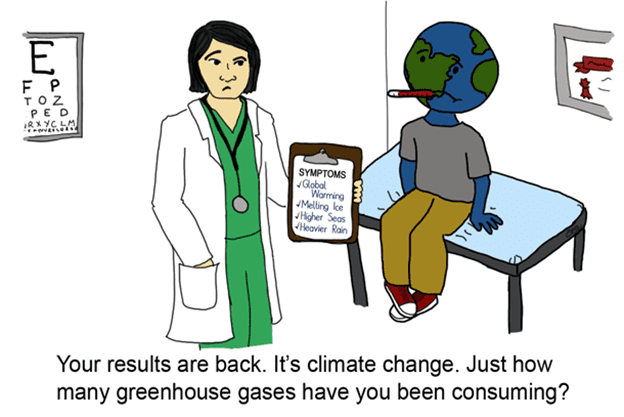 But we’ve always had climate fluctuations. What’s the big deal about this one?

Earth has indeed warmed and cooled over eons. However, temperature data from the past 200 years show an alarming, off-the-charts increase of 1.1º C since the 1800s. Take a look at this chart: 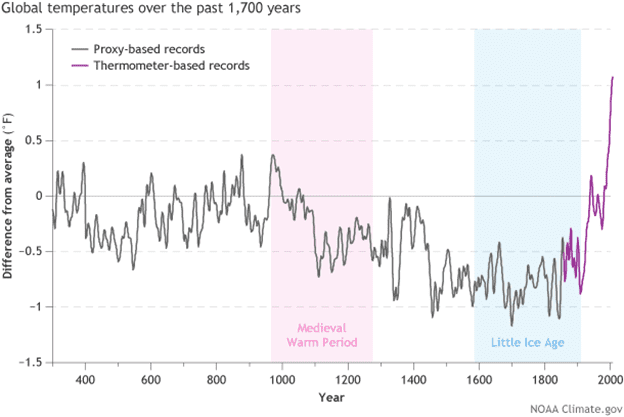 Temperatures over the past 2000 years compared to the 1961-1990 average, based on proxy data (tree rings, ice cores, corals) and modern temperature data. Over the past two millennia, the climate has warmed and cooled, but no previous warming episodes appear to have been as large and sudden as recent global warming. NOAA Climate.gov graph by Fiona Martin, adapted from Figure 34.5 in the National Climate Assessment, based on data from Mann et al., 2008.

Despite a brief pause when Covid lockdowns brought manufacturing to a standstill, global emissions, and thus global temperatures, have continued to climb. The decade of 2011-2020 was the warmest ever recorded. And the situation isn’t getting any better. According to NOAA’s 2020 Annual Climate Report, the combined land and ocean temperature rate increase per decade (0.18°C / 0.32°F) has doubled since the 1880s.

This unprecedented warming is terrible news because Earth is an interconnected system. Changes in one area can cause unexpected changes elsewhere. For instance, melting polar ice caps cause sea levels to rise, wiping out coastal communities.

So what can you do about climate change?

Although the statistics can be disheartening, collectively we can move the needle to help heal our planet. Here are three things you can do: